How and why Australian whistleblowing laws need an overhaul: new report 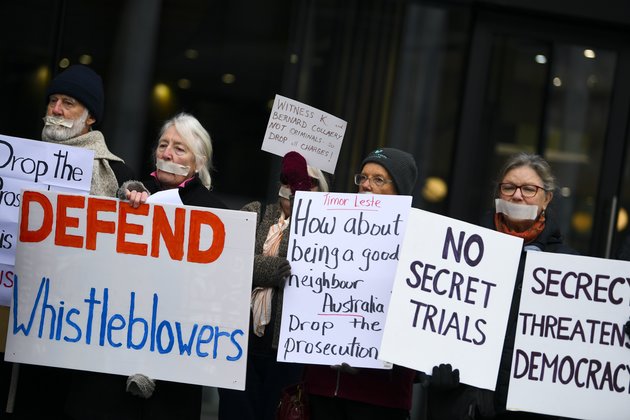 Recent developments in Australian whistleblowing cases have shown how critical it is to get our whistleblower protection laws back up to world standards.

Fortunately, there are signs the new government will press ahead with reforms - but what's involved in truly getting these right?

The importance of whistleblowing has been reinforced by parliamentary debate over Australia's new National Anti-Corruption Commission (NACC), which resumed this week. On November 10, the Joint Select Committee reviewing the government's bill expressed unanimous support for "wider-ranging whistleblower protection reforms" to follow, including "specific" consideration of an independent whistleblower protection commission.

Federal Attorney-General Mark Dreyfus has announced reform will start within days, with some "priority amendments" to the whistleblowing law for federal public servants, even as the long awaited anti-corruption body is debated and finalised. He has also flagged there will be more to follow.

How much more, and why is it vital? A new research report, published today by Griffith University, the Human Rights Law Centre and Transparency International Australia, seeks to present a clear roadmap for getting these reforms right.

In theory, there's strong consensus in favour of protections for "public interest whistleblowers". These are the insiders who play a vital role in our integrity systems by speaking up about suspected wrongdoing, usually internally but also to regulators or, if necessary, publicly.

However, protecting whistleblowers often becomes much more controversial in reality, depending on whose interests are affected.

On Monday, federal independent MP Andrew Wilkie - himself a prominent former national security whistleblower - initiated a fresh parliamentary debate in support of stronger protections. He claimed some in the coal industry had lied about the quality of Australian exports. A mining industry whistleblower lay at the heart of the allegations.

Three weeks ago, former army lawyer David McBride dropped his attempted defence under the Public Interest Disclosure Act against criminal charges for releasing Defence information about war crimes in Afghanistan. Federal prosecutors claimed the information he sought to use was, itself, too secret to even be admitted in a closed court. This effectively rendered the whistleblower protection law null and void.

In June 2021, the former intelligence operative known as "Witness K" pleaded guilty to revealing alleged commercial espionage by Australia against our close neighbour Timor Leste. Again, the whistleblowing law failed to help because the categories of "intelligence information" that cannot be revealed under the act are so wide, they effectively mean nothing can be.

The attorney-general withdrew his consent for the prosecution of Witness K's lawyer, Bernard Collaery. But he has come under international pressure to do more to end the prosecutions of McBride and Australian Taxation Office whistleblower Richard Boyle. The latter is awaiting a decision on his public interest defence, after four damaging years of charges without even yet getting to a trial.

Why we need an overhaul of whistleblowing laws

The government's commitment to overhaul whistleblower protections is good news. But however worthwhile, the "priority amendments" recommended by a now out-of-date 2016 review involve few steps towards addressing the deeper defects in the laws.

Most of those 2016 recommendations were designed to make it easier for agencies to navigate their roles, more than improve the protections.

This is why having a forward plan for a full overhaul of federal whistleblowing laws in 2023 is so important.

High among the issues is the lack of effective machinery to enforce whistleblowers' rights. This problem is shared not only by the public sector law, but by private sector protections in the Corporations Act 2001, reformed as recently as 2019.

A whistleblower protection authority was recommended by the Parliamentary Joint Committee on Corporations and Financial Services in 2017. Such an authority also formed part of the national integrity commission proposals put forward by independents Cathy McGowan and Helen Haines, and the Greens, before the 2019 and 2022 elections.

As well, our analysis shows that defective public sector protections have now spread into private sector laws, and even state laws in the case of NSW. Despite other innovations, our federal laws impose tough tests before aggrieved whistleblowers can claim civil compensation for any damage they suffer. They effectively require a criminal reprisal before this can happen.

These protections fall short of European or United States' standards for when a whistleblower can claim for damage. They're also increasingly inconsistent across different areas of federal regulation.

Under the Aged Care Act and National Disability Insurance Scheme Act, for example, whistleblowers can also only claim protection if deemed to have complained "in good faith", irrespective of the truth of their information. They must also identify themselves when making any disclosure. They get no protection if they speak out publicly, even if their internal complaints have been entirely ignored.

Read more: Why whistleblowers must be kept confidential - just look at what happened to me

Union whistleblowers operate under different rules again. And in many areas of federal regulation, unless they're employees of a corporation, many whistleblowers get no protection at all.

In the US, whistleblower protections are split across more than 47 different pieces of regulatory legislation. Australia can avoid this nightmare of red tape, duplication, confusion and inconsistency.

All this is solvable if whistleblowing law reform is approached systematically, as a whole-of-government initiative - not in the rushed, piecemeal fashion that caused the problems in existing laws.

With trust in the new National Anti-Corruption Commission hinging on the ability of public and private employees to safely bring forward information, the need for comprehensive reform couldn't be clearer.

We know what needs doing. The challenge now is how best to follow the larger roadmap for reform, beyond its first stages, and ensure this time we complete the whistleblower protection mission.