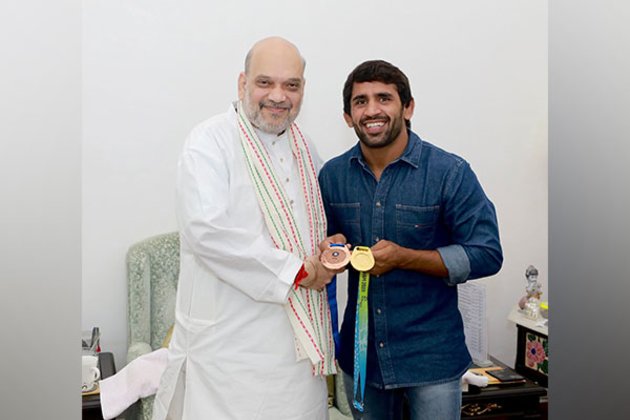 "Met the country's illustrious Home Minister Shri @AmitShah ji, it was great to discuss about sports, always get your blessings together, the guidance given by him always inspires to do better for the country. Jai Hind Jai Bharat," tweeted Bajrang Punia after meeting the Home Minister Amit Shah.

Ace Indian wrestler and Olympic medalist Bajrang Punia captured a bronze medal in the men's 65 kg category at the recently World Wrestling Championships 2022, by defeating Puerto Rico's Sebastian C Rivera in the bronze medal bout. He defeated Rivera in the bout by 11-9. The wrestler, who recently won a gold medal in Commonwealth Games scripted a remarkable comeback to win the match. He won on the basis of VPO1-Points and the opponent's scores.

This was India's second medal at the 2022 World Wrestling Championships with the first medal being won by Vinesh Phogat.

Bajrang Punia landed in Delhi at IGI airport on Tuesday amidst fans turning up in huge numbers to welcome their hero. Fans flocked to the IGI airport accompanied by celebratory music being played on dhols and trumpets. They grooved to dhol beats while welcoming Bajrang at the airport. (ANI)