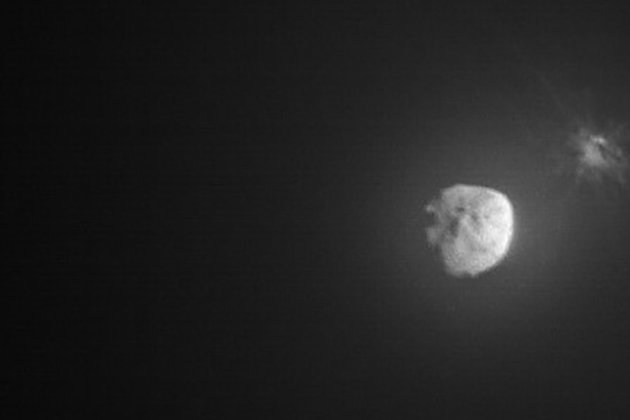 Paris - The James Webb and Hubble telescopes on Thursday revealed their first images of a spacecraft deliberately smashing into an asteroid, as astronomers indicated that the impact looks to have been much greater than expected.

The world's telescopes turned their gaze toward the space rock Dimorphos earlier this week for a historic test of Earth's ability to defend itself against a potential life-threatening asteroid in the future.

Images taken by Earth-bound telescopes showed a vast cloud of dust expanding out of Dimorphos - and its big brother Didymos, which it orbits - after the spaceship hit.

While those images showed matter spraying out over thousands of kilometers, the James Webb and Hubble images 'zoom in much closer,' said Alan Fitzsimmons, an astronomer at Queen's University Belfast involved in observations with the ATLAS project.

James Webb and Hubble can offer a view 'within just a few kilometers of the asteroids and you can really clearly see how the material is flying out from that explosive impact by DART,' Fitzsimmons told AFP.

'It really is quite spectacular,' he said. 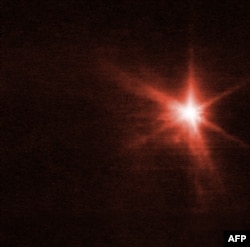 This handout picture released Sept. 29, 2022, by the European Space Agency is an image from the Webb telescope's Near-Infrared Camera showing Dimorphos, an asteroid moonlet, about four hours after NASA's Double Asteroid Redirection Test (DART) made impact.

An image taken by James Webb's Near-Infrared Camera (NIRCam) four hours after impact shows 'plumes of material appearing as wisps streaming away from the center of where the impact took place,' according to a joint statement from the European Space Agency, James Webb and Hubble.

Hubble images from 22 minutes, five hours and eight hours after impact show the expanding spray of matter from where DART hit.

'Worried there was nothing left'

Ian Carnelli of the European Space Agency (ESA) said that the 'really impressive' Webb and Hubble images were remarkably similar to those taken by the toaster-sized satellite LICIACube, which was just 50 kilometers from the asteroid after separating from the DART spacecraft a few weeks ago.

The images depict an impact that looks 'a lot bigger than we expected,' said Carnelli, the manager of the ESA's Hera mission, which intends to inspect the damage in four years.

'I was really worried there was nothing left of Dimorphos' at first, Carnelli told AFP.

The Hera mission, which is scheduled to launch in October 2024 and arrive at the asteroid in 2026, had expected to survey a crater around 10 meters (33 feet) in diameter.

It now looks like it will be far bigger, Carnelli said, 'if there is a crater at all; maybe a piece of Dimorphos was just chunked off.'

The true measure of DART's success will be exactly how much it diverted the asteroid's trajectory, so the world can start preparing to defend itself against bigger asteroids that could head our way in the future.

It will likely take Earth-bound telescopes and radars at least a week for a first estimate of how much the asteroid's orbit has been altered, and three or four weeks before there is a precise measurement, Carnelli said.

'I am expecting a much bigger deflection than we had planned,' he said.

That would have 'huge implications in planetary defense because it means that this technique could be used for much larger asteroids,' Carnelli added.

'Until today, we thought that the only deflection technique would be to send a nuclear device.'

Fitzsimmons said that even if no material had been 'flung off' Dimorphos, DART still would have slightly affected its orbit.

'But the more material and the faster it's moving, the more of a deflection there will have been,' he said.

The observations from James Webb and Hubble will help reveal how much - and how quickly - matter sprayed from the asteroid, as well as the nature of its surface.

Since launching in December and releasing its first images in July, James Webb has taken the title of most powerful space telescope from Hubble.

Fitzsimmons said the images were 'a beautiful demonstration of the extra science you can get by using more than one telescope simultaneously.'