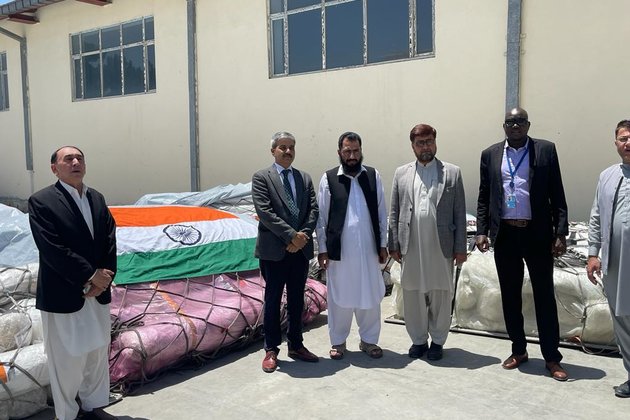 Kabul [Afghanistan], June 24 (ANI): In the wake of the tragic earthquake that struck Afghanistan on June 22, Ministry of External Affairs Joint Secretary (PAI), JP Singh handed over India's humanitarian assistance to Afghanistan on Friday in the presence of Taliban officials.

The Taliban have welcomed India's decision to return its technical team to continue humanitarian assistance in Afghanistan.

"Islamic Emirate of Afghanistan (lEA) welcomes decision by India to return diplomats and technical team to their embassy in Kabul to continue their relations with the Afghan people and their humanitarian assistance," Taliban spokesperson Abdul Qahar Balkhi said in a statement on Thursday.

Major relief efforts are ongoing following a major magnitude earthquake which struck Paktika province in the early hours of Wednesday morning. To date, around 1000 people are estimated to have been killed across Barmal and Giyan districts in Paktika province, and Spera district in Khost province.

In addition, at least 1,455 people have been injured across three of the six most affected districts of Barmal, Giyan, and Spera - many of them seriously.Further, nearly 1,500 homes have now been verified as destroyed and damaged in Giyan district, Paktika province.

Over this incident, India expressed condolences to the victims and their families impacted by the tragic earthquake in Afghanistan. India said it remains committed to providing assistance and support in this hour of need.

The disaster comes as Afghanistan continues to struggle with a severe economic crisis since the Taliban took over, as US-led international forces withdrew following two decades of war.

A UN agency said Afghanistan had asked humanitarian agencies to help with rescue efforts, and teams were being dispatched to the quake-hit area. (ANI)