The only PLAGUE fort in the world is in Russia 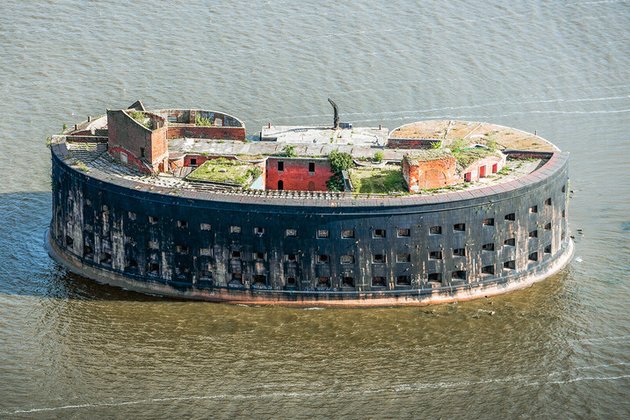 This fortress, with its black charred walls, was supposed to protect the sea borders of the Russian Empire, but, instead, became a laboratory for the study of a dangerous disease. 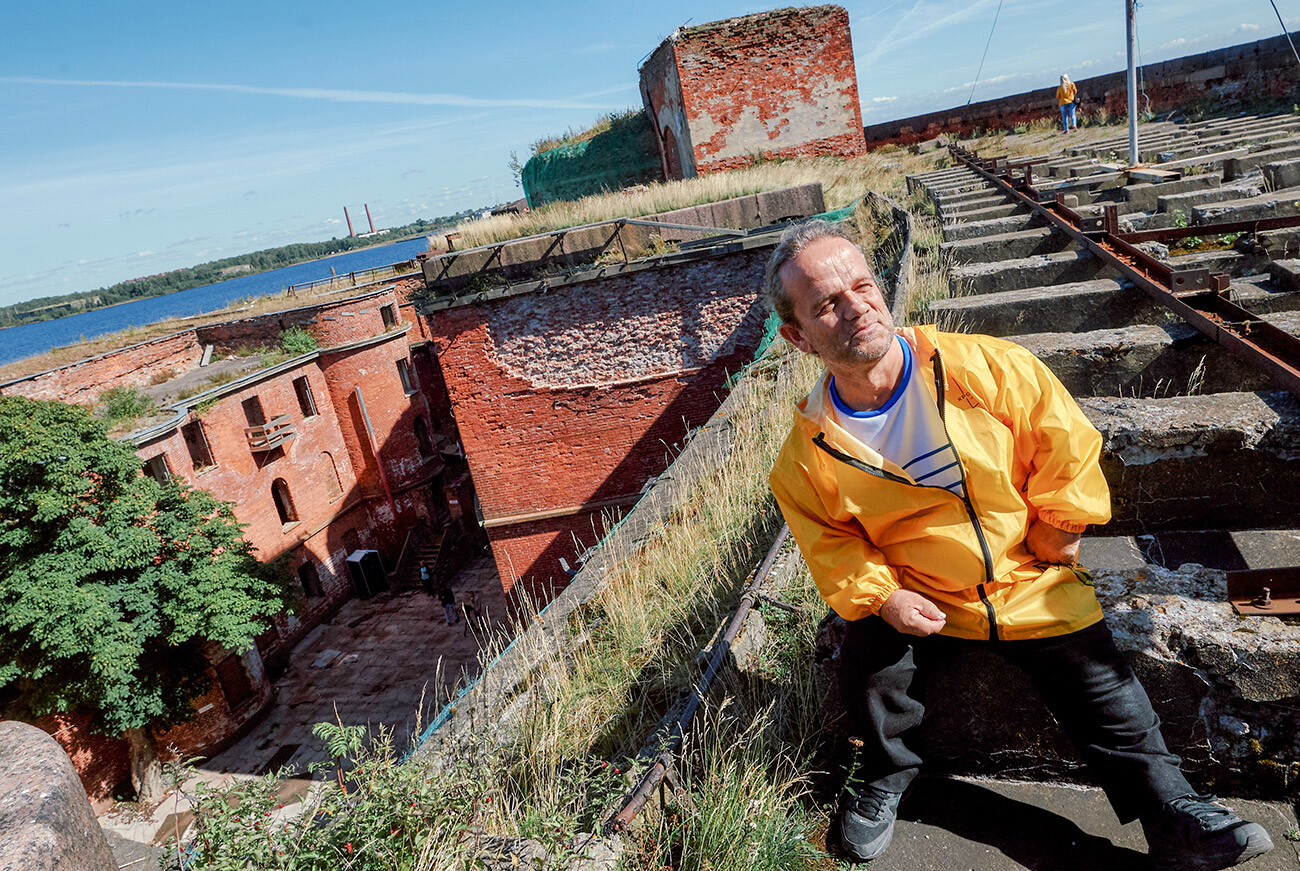 A Russian "Fort Boyard" is what this sea fortress, situated two kilometers from Kronstadt (a town outside St. Petersburg), is often called. In actual fact, it was built 20 years before the famous French fort - in 1845 - and was never used as a prison. By the way, neither did it become famous as a defensive structure. The story of the fort turns out to be far more... interesting. 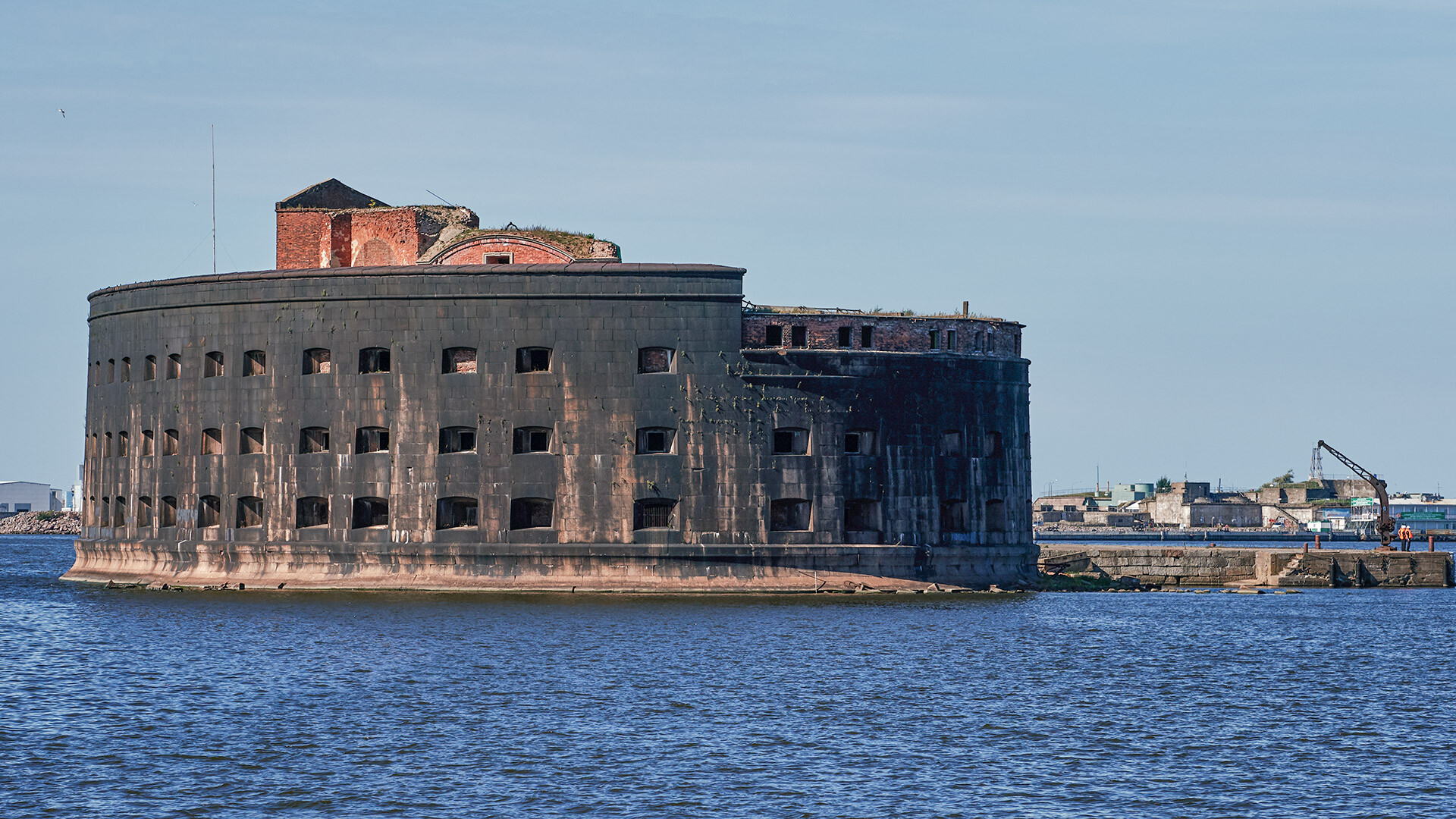 Kronstadt is a fortress town situated on the Island of Kotlin, which is, itself, surrounded by a whole network of forts situated on islands. These forts began to be built almost immediately after the founding of St. Petersburg or, more precisely, a year later, in 1704, and continued to be built until the beginning of the 20th century. The town is protected by a total of 21 forts, 17 of which are in the Gulf of Finland and the rest on the mainland.

This fort, which was named after Emperor Alexander I, was built between 1838 and 1845 on an artificial island. It was big enough to hold a garrison of up to 1,000 men and more than a hundred of the latest large-caliber guns were deployed on it - in a word, the Russian seamen were armed to the teeth. Nevertheless, during the whole of its existence, it was only put on full combat alert three times: during the Crimean War in 1855, in a potential confrontation with the British Empire in 1863 and, in 1877, during the Russo-Turkish War. At the same time, the Alexander I Fort was never involved in military action and, in 1896, it was decommissioned, as there was no need for it. But it didn't stand idle for long. 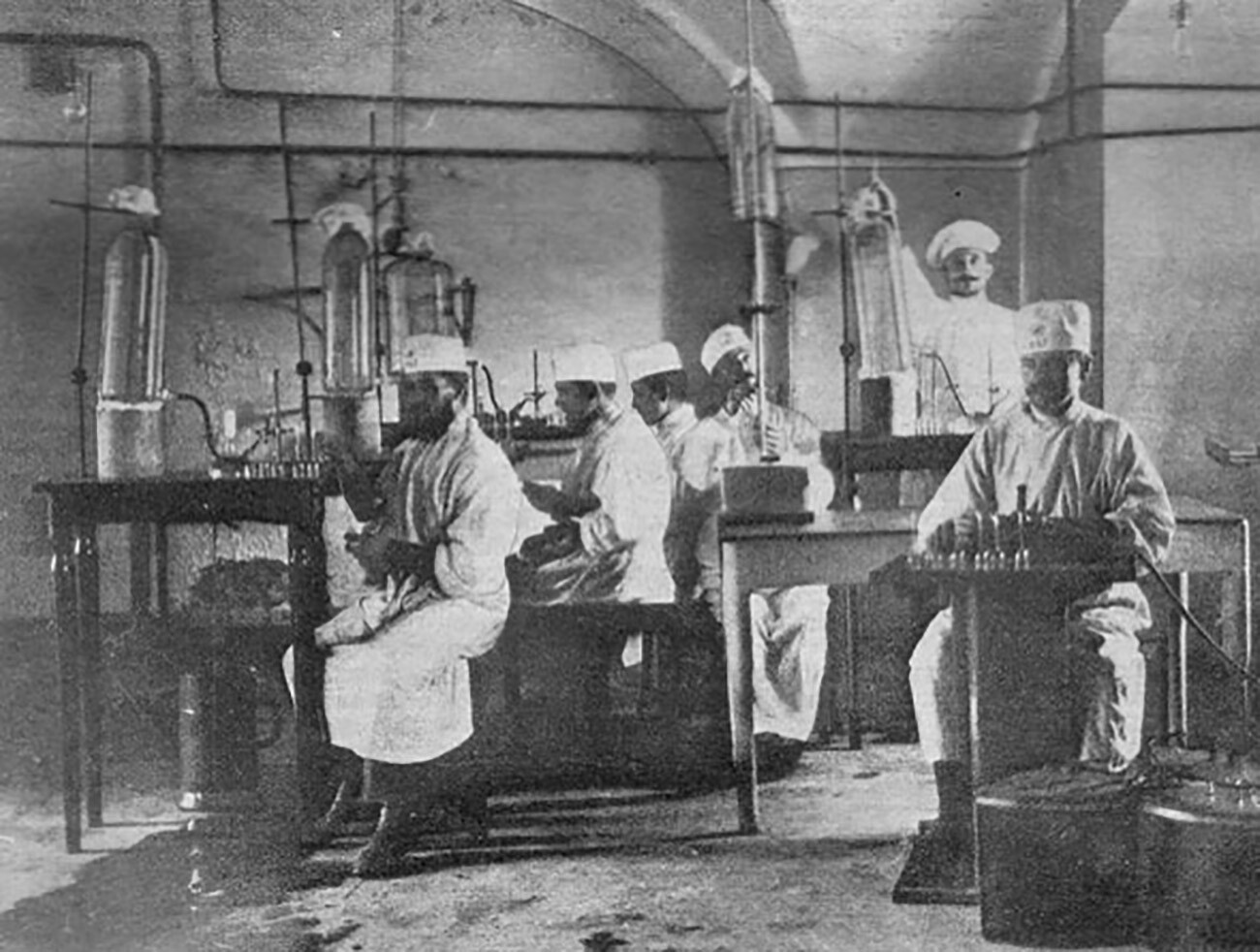 At the end of the 19th century, the threat of a plague epidemic loomed over the world. This deadly disease is usually associated with the Middle Ages, but, at the time, it had become a reality again. With the advancement of trains and steamships, the plague started to seep through from Asian countries to areas in Russia's southeast and authorities feared a further spread of the infection to Europe. In 1897, Emperor Nicholas II established a special commission on measures "to prevent the spread of plague infection", chaired by Duke Alexander of Oldenburg. 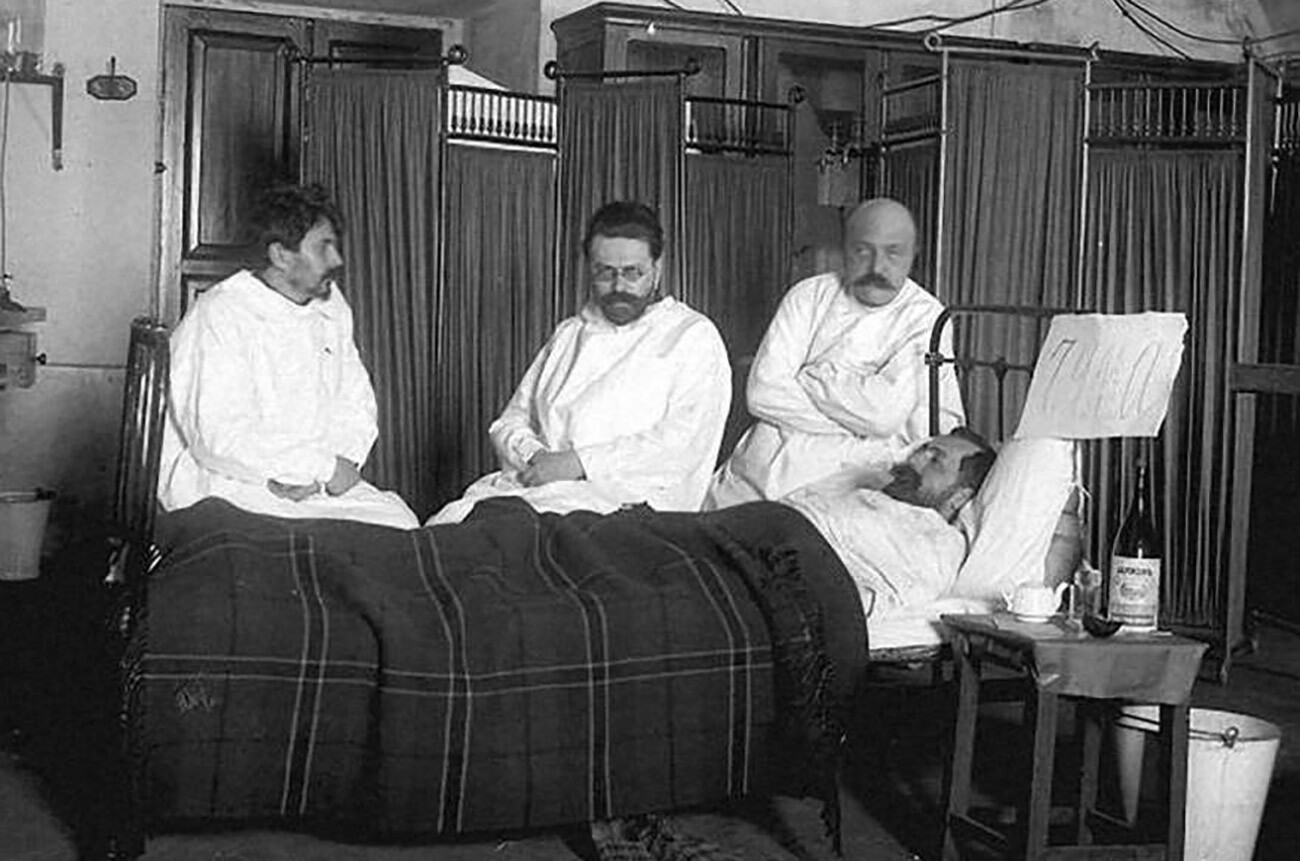 He was a highly-educated person, who was in correspondence with French microbiologist Louis Pasteur and German physician Robert Koch; he founded the Imperial Institute of Experimental Medicine, which was entrusted with creating a plague vaccine and an anti-plague serum. For the serum, horse blood with antibodies against the plague bacillus was used. The production of biological medicinal products was dangerous, so the Duke managed to obtain the deserted and, most importantly, isolated Alexander I Fort for his use. Plumbing, electricity, steam heating and drainage were installed in the fort's chambers. Gradually, the fort came to be dubbed the 'plague' fort, although cholera, tetanus and typhus were also studied there. 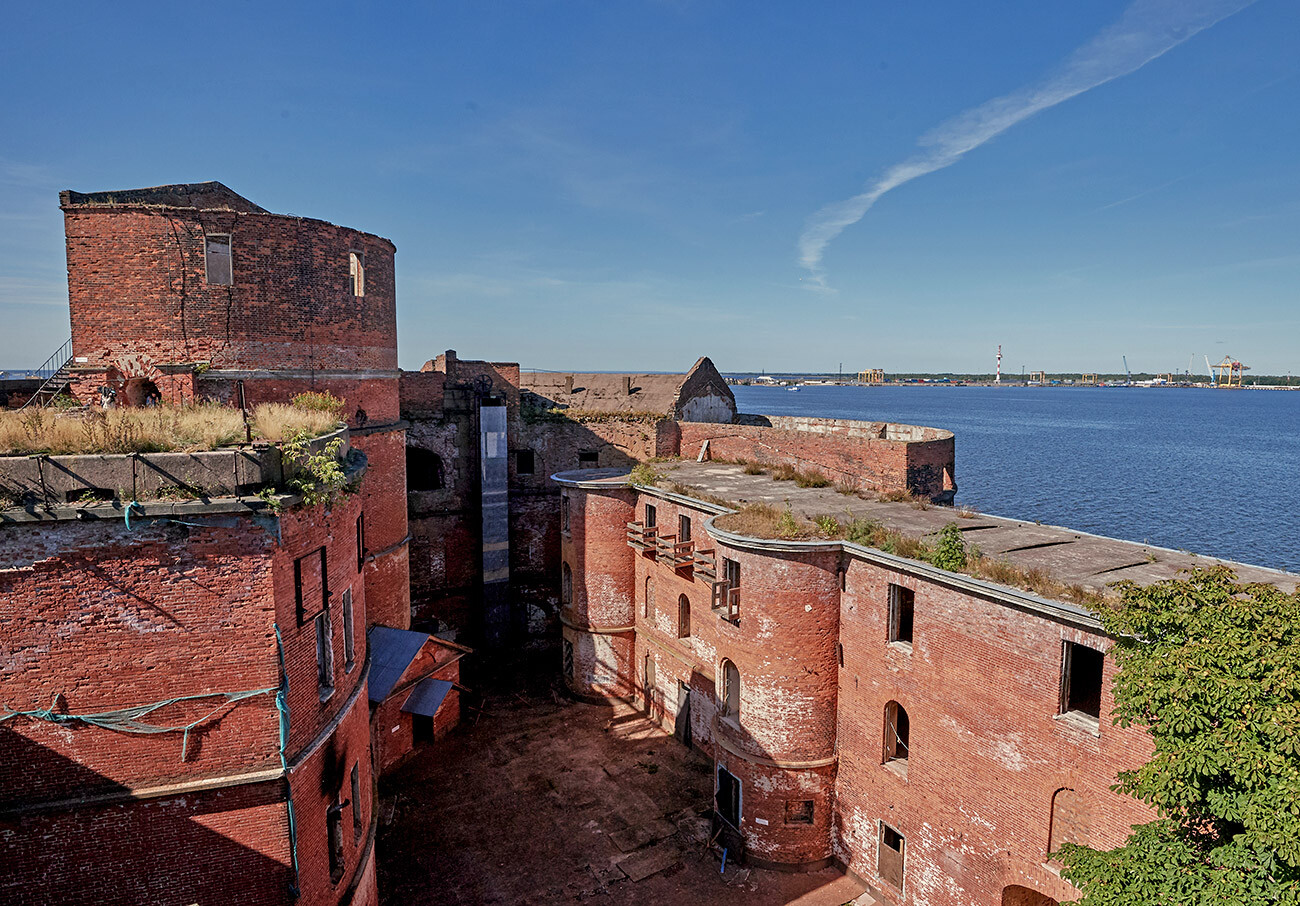 Every year, the laboratory produced up to half a million doses of serum, which it supplied to both Asia and Europe (for instance, in 1900, several thousand doses were sent to Glasgow, after cases of plague were found there). 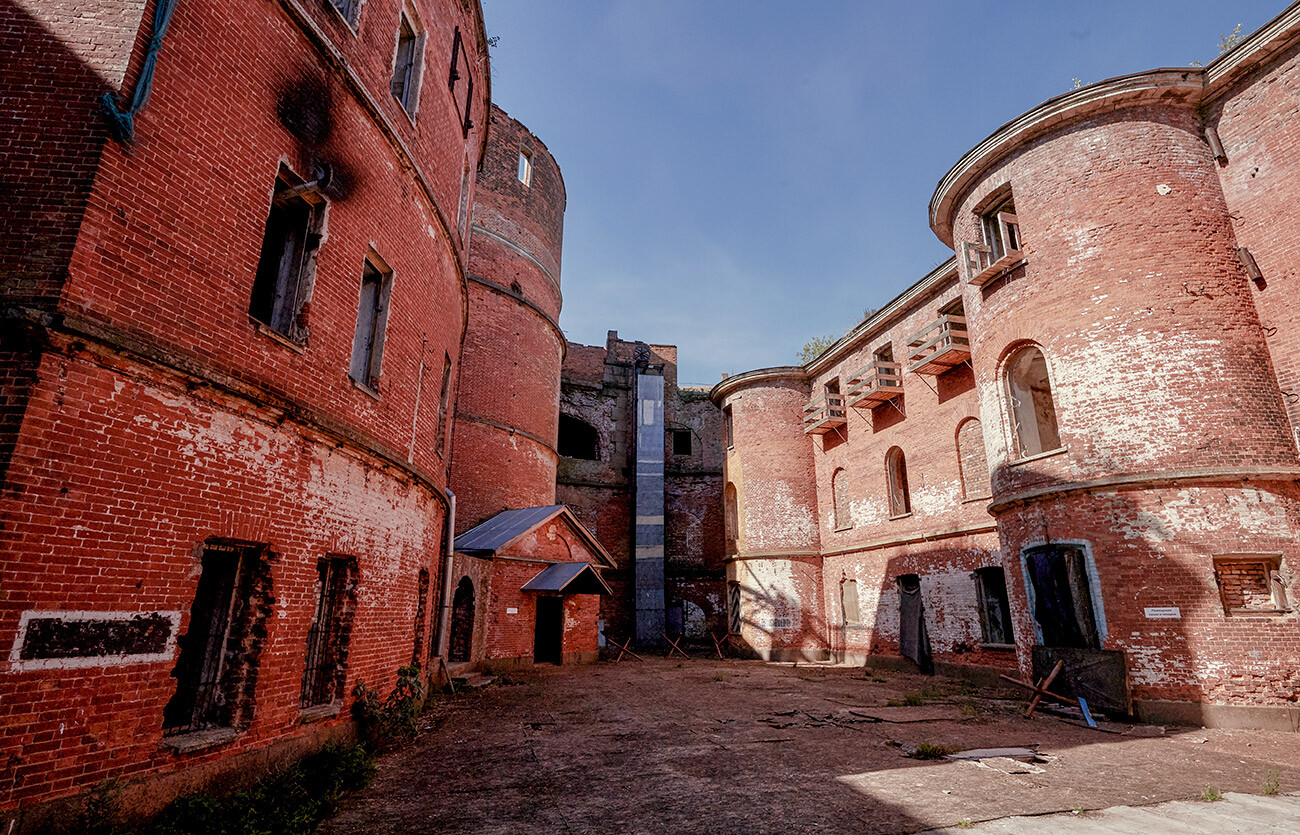 About 40 employees permanently lived at the fort. Cargoes from the "mainland" were delivered by a small ship named 'Mikrob' ('Microbe') and left on the pier. The scientists didn't leave the island, as this could have spread the dangerous disease. It is known that two doctors died after becoming infected while working there in 1904 and 1907. 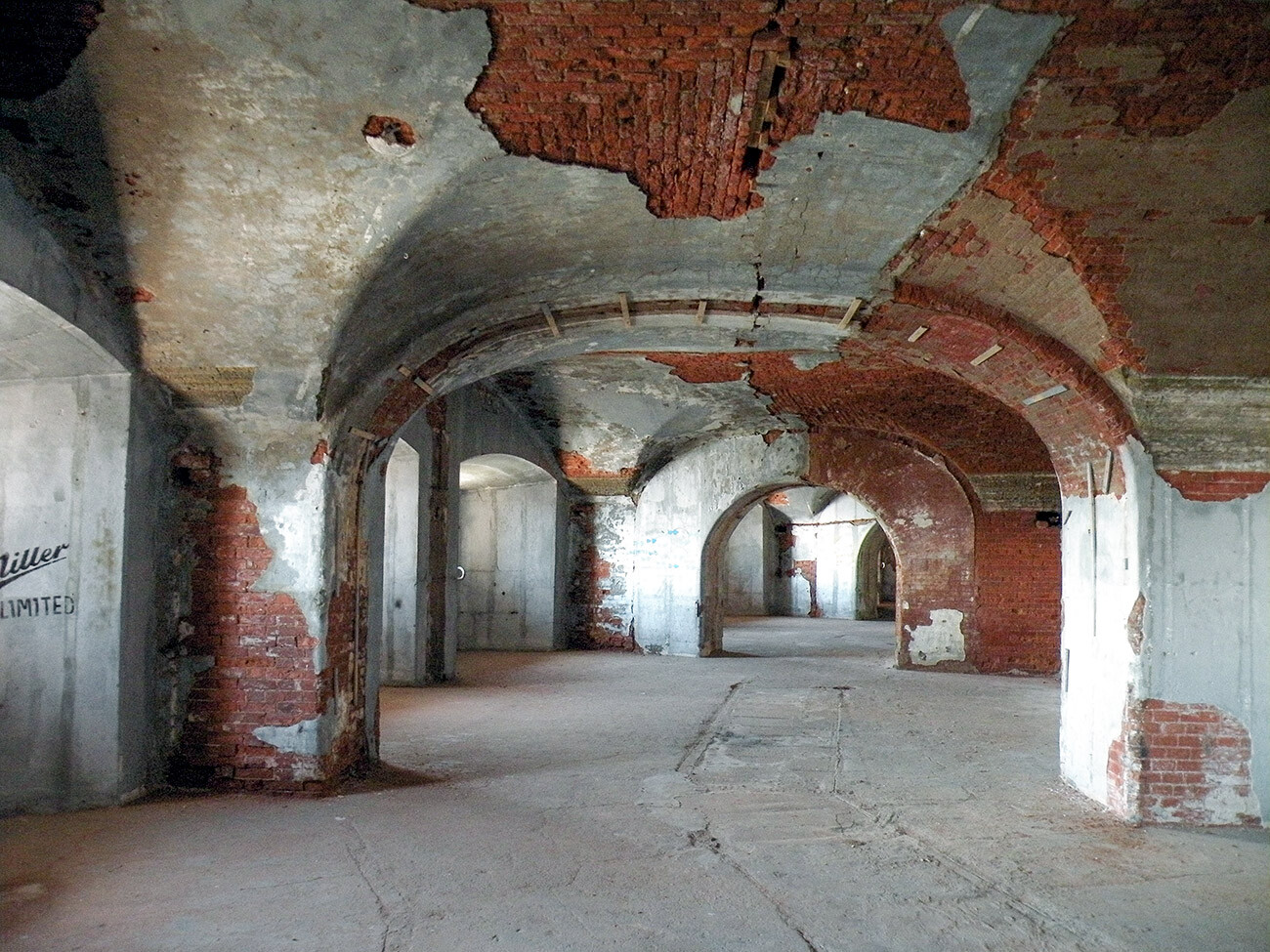 The research continued until World War I, when most of the scientists were called up into the army. After the 1917 February Revolution, Duke Alexander of Oldenburg had to leave his post and the country. The new management of the institute moved it to Saratov (in the south of Volga Region), where the 'Mikrob' Anti-Plague Institute was established in 1918.

From derelict building to museum 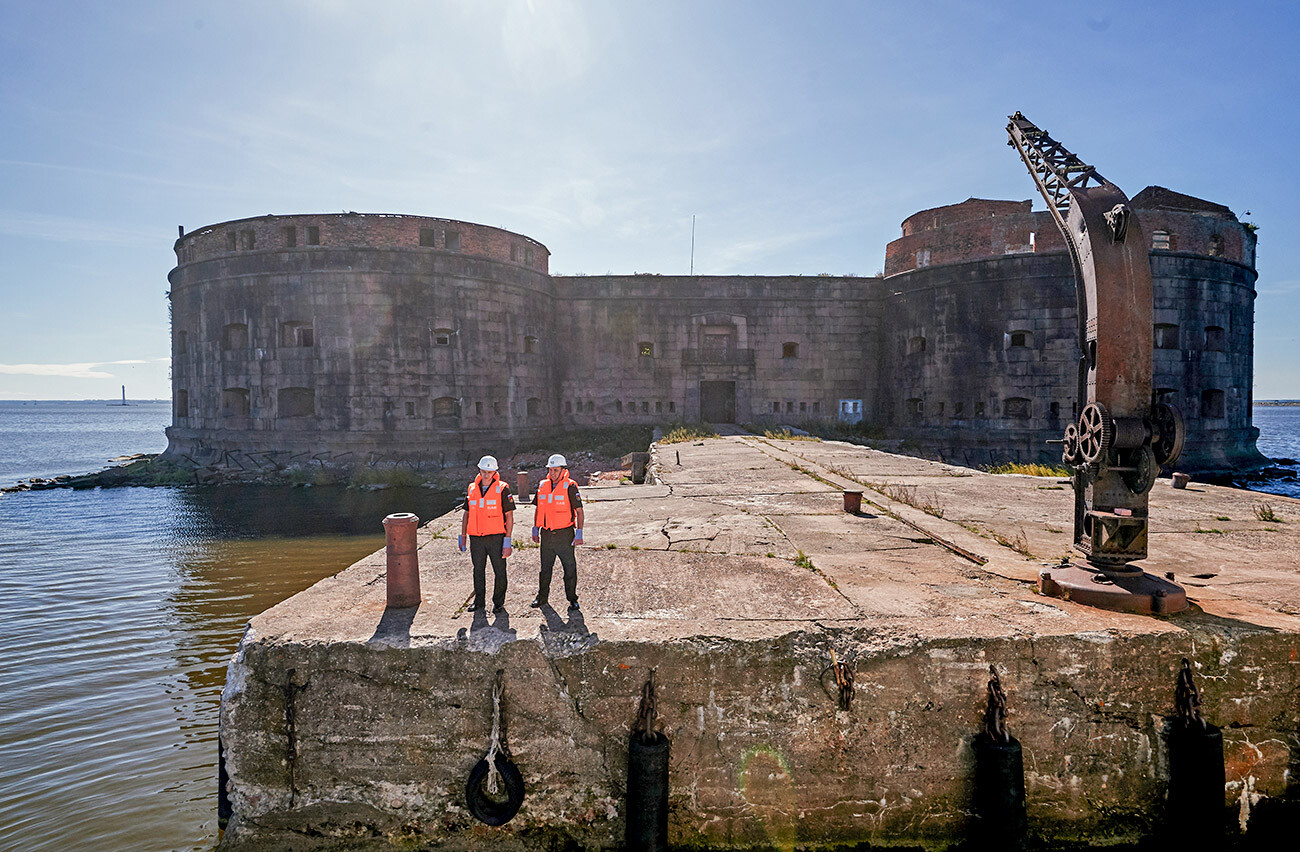 From 1923, the fort was used as a depot for minesweeping equipment, but, by the early 1980s, it had been practically abandoned. Kronstadt itself was a closed military town until 1996, although an exception was made for a Lenfilm crew. 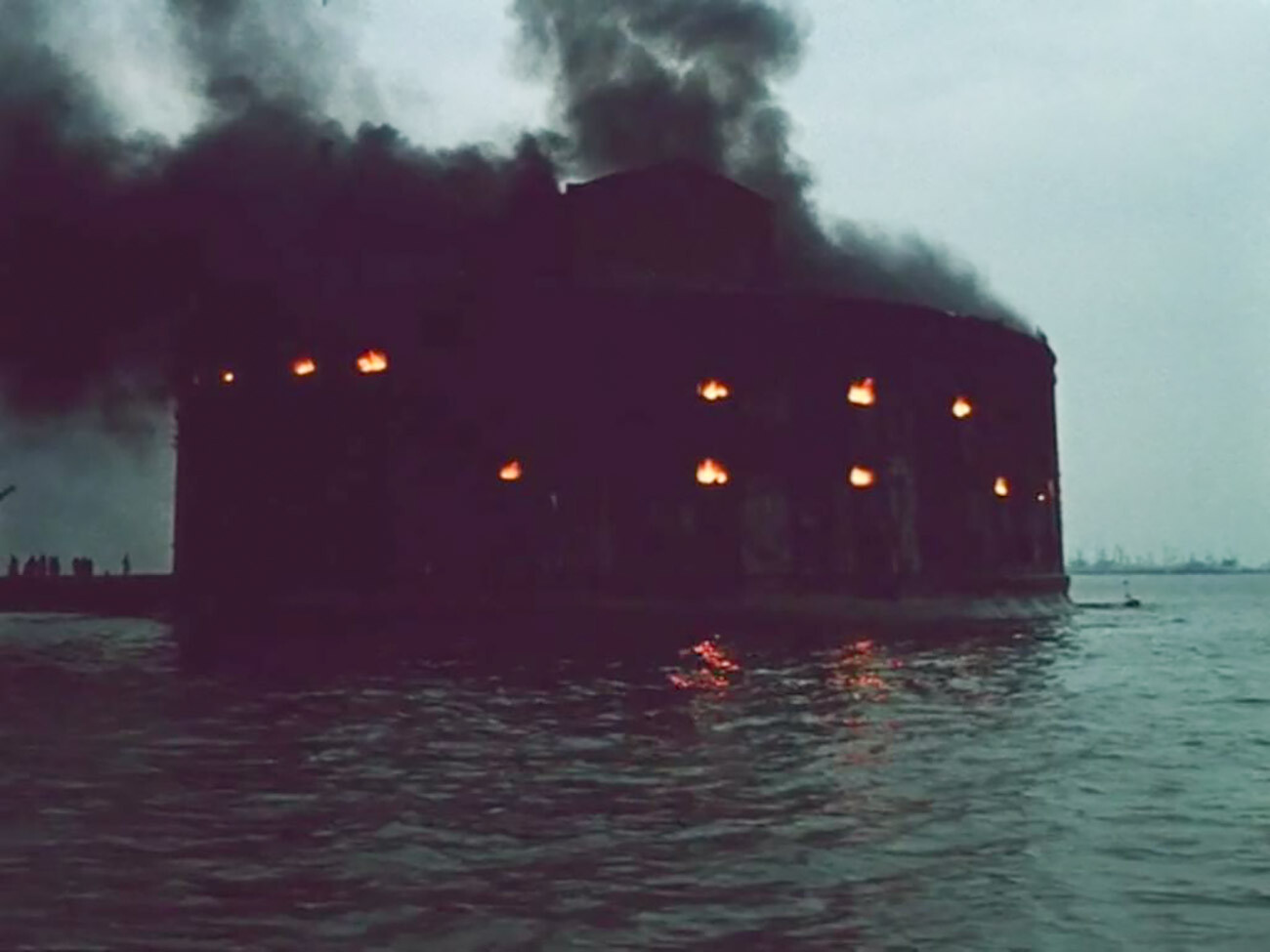 The scene from the movie was REAL.

In the mid-1980s, filming for 'Gunpowder' (1985), a movie set in the Great Patriotic War, took place there, using the real location. A fire in the movie was made to look highly realistic, but the fort ended up severely scorched and its charred walls became its new "calling card".

In the late 1990s, summer rave parties were held there and, subsequently, tourists began to be brought on boat trips to the fort. It caught fire for a second time in 2017, when some garbage ignited. 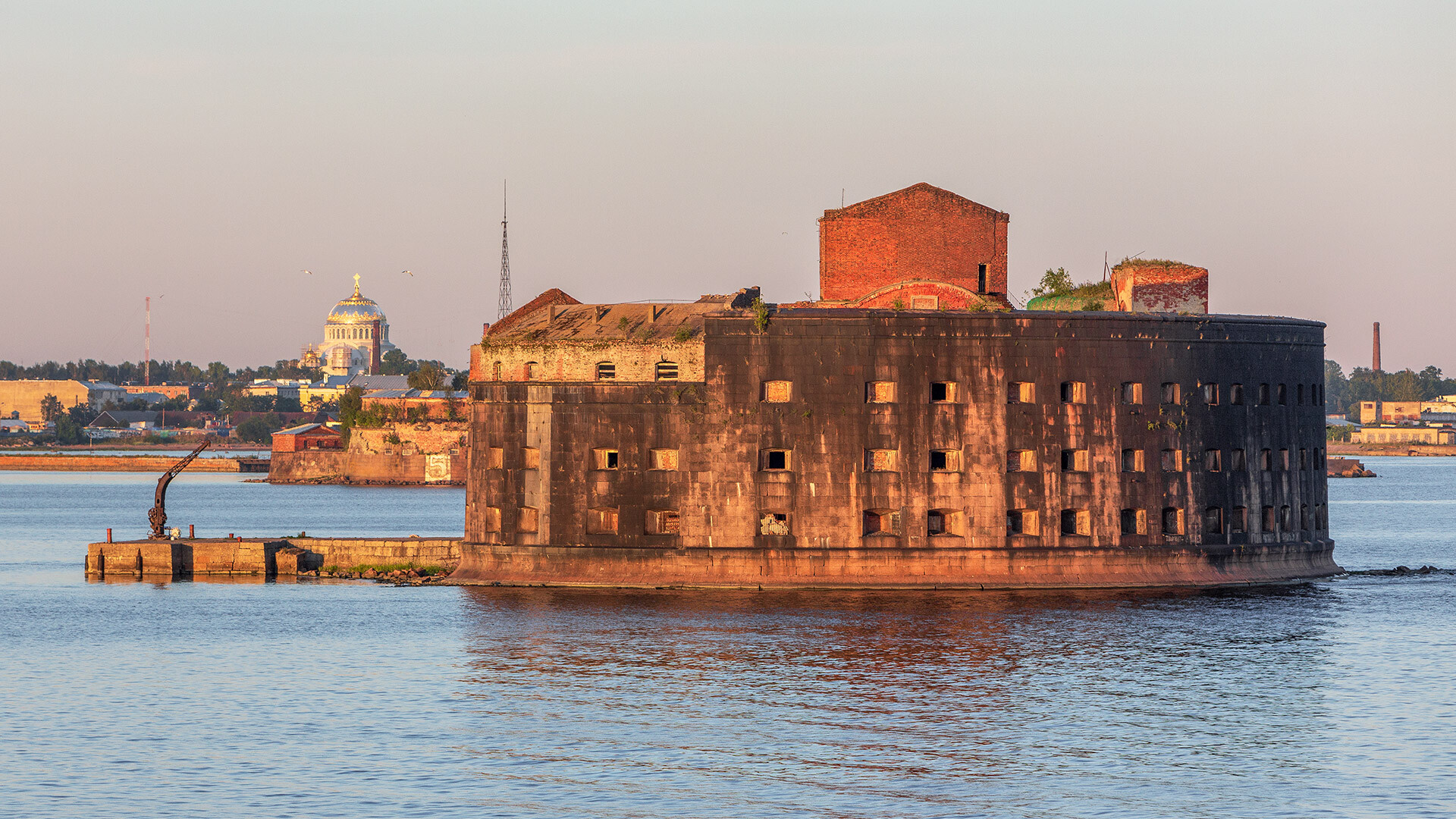 The fort is now undergoing restoration and a museum devoted to its history is to open there in 2025.

LONDON, England: A UK parliamentary committee has told lawmakers that they may not bring babies to parliamentary proceedings and debates.The ... 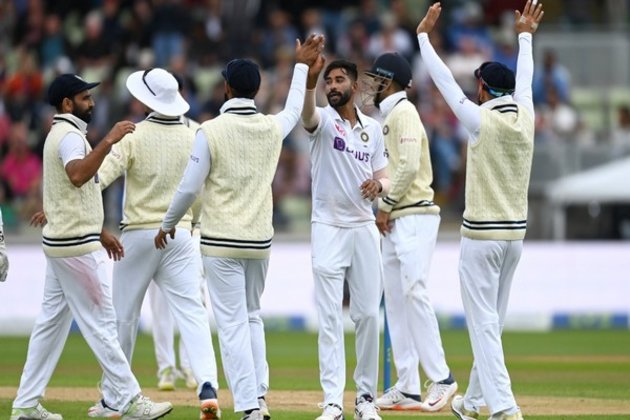 Birmingham [UK], July 3 (ANI): Indian pacers once again excelled as they bowled out England to 284 and the pair ...

US sanctions causes 90 percent drop in chips sent to Russia

WASHINGTON D.C.: U.S. Commerce Secretary Gina Raimondo has said that since the U.S. and its allies imposed sanctions on Moscow ...