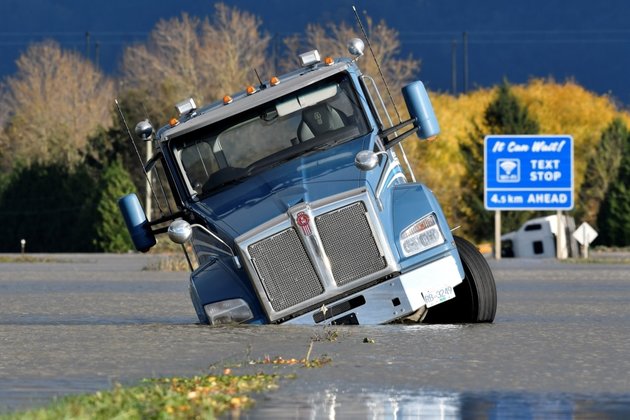 MERRITT, BRITISH COLUMBIA - The port of Vancouver, Canada's largest, said on Tuesday that all rail access had been cut by floods and landslides farther east that killed at least one person and left two others missing.

'All rail service coming to and from the Port of Vancouver is halted because of flooding in the British Columbia interior,' port spokesperson Matti Polychronis said.

At least one person was killed when a mudslide swept cars off Highway 99 near Pemberton, some 100 miles (160 kilometers) to the northeast of Vancouver. 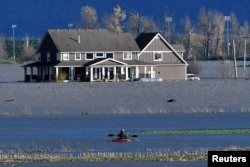 A paddler kayaks on a flooded stretch of farmland in Abbotsford, British Columbia, Canada, November 16, 2021.

Search and rescue crews were combing through the rubble for signs of survivors or additional casualties, officials said.

Vancouver's port moves C$550 million ($440 million) worth of cargo each day, ranging from automobiles and finished goods to essential commodities.

The floods temporarily shut down much of the movement of wheat and canola from Canada, one of the world's biggest grain exporters, during a busy time for trains to haul grain to the port following the harvest.

This year drought has sharply reduced the size of Canada's crops, meaning a rail disruption of a few days may not create a significant backlog, a grain industry source told Reuters.

Del Dosdall, senior export manager at grain handler Parrish & Heimbecker, said he expected some rail service could be restored by the weekend. Another industry source said he expected the shutdown to last weeks. 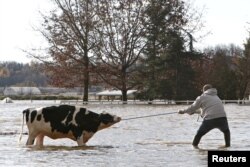 Floods have also hampered pipelines. Enbridge shut a segment of a British Columbia natural gas pipeline as a precaution.

The storms also forced the closure of the Trans Mountain pipeline, which carries up to 300,000 barrels per day of crude oil from Alberta to the Pacific Coast.

Copper and coal miner Teck Resources Limited said the floods had disrupted movement of its commodities to its export terminals, while potash exporter Canpotex said it was looking for alternatives to move the crop nutrient overseas.

Directly to the south of British Columbia, in Washington state, heavy rains forced evacuations and cut off electricity for more than 150,000 households on Monday. The U.S. National Weather Service on Tuesday issued a flash flood warning in Mount Vernon, Washington, 'due to the potential for a levee failure.'

Some areas of British Columbia received 20 centimeters (8 inches) of rain on Sunday, the amount that usually falls in a month.

Authorities in Merritt, some 200 km (120 miles) northeast of Vancouver, ordered all 8,000 citizens to leave on Monday as river waters rose quickly, but some were still trapped in their homes on Tuesday, said city spokesman Greg Lowis.

Snow blanketed the town on Tuesday and some cars could be seen floating in the flood waters still up to 1.22 meters (4 feet) high. The towns of Chilliwack and Abbotsford ordered partial evacuations.

The landslides and floods come less than six months after wildfires gutted an entire town, as temperatures in the province soared during a record-breaking heat dome.

PARIS, France: After Paris changed its travel restrictions, announcing that UK travellers would only need to present a negative Covid-19 ...

NEW DELHI, India: The first day of talks between the UK and India on a potential free trade agreement took ...

LONDON, England: The large British energy firm E.ON Next has delivered an apology after sending warm socks to 30,000 customers ...

LONDON, England: A rare warning by the UK's MI5 intelligence agency has revealed that a Chinese agent, Christine Ching Kui ...

Proposal claims insulation could save UK households 500 pounds a year

LONDON, England: According to the Energy Efficiency Infrastructure Group (EEIG), made up of business organizations and charities, improved insulation could ... 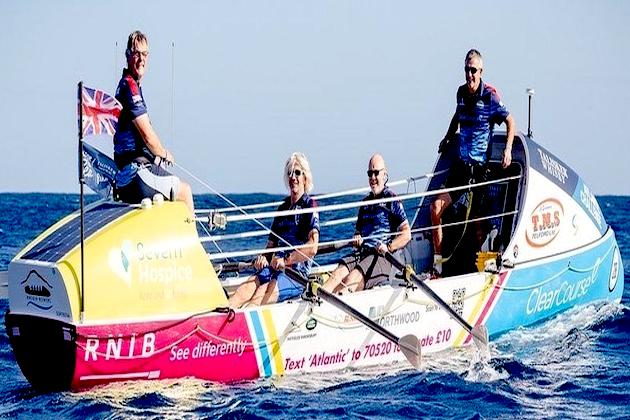 LONDON, England: A marlin perforated a boat with four UK members of a rowing team aboard, which was traveling on ...

KIEV, Ukraine: Many government websites in Ukraine have suffered cyberattacks, with the intruders posting the text, "Be afraid and wait ...

BRUSSELS, Belgium: Zara Rutherford, a teenager from Belgium, is nearing the completion of a solo round-the-world flight. Rutherford, age 19, ...

FedEx asks US to let it install laser defenses to planes

MEMPHIS, Tennessee: FedEx is seeking permission to arm its cargo planes with defensive systems to thwart attacks by heat-seeking missiles. ...

Not since the 1936 Olympics in Berlin has a government tried to prevent an athlete from competing in a sporting ...

PARIS, France: French teachers have begun a nationwide strike organized by teachers unions to protest against class disruptions caused by ...

Diamonds of the Night (Dmanty noci)