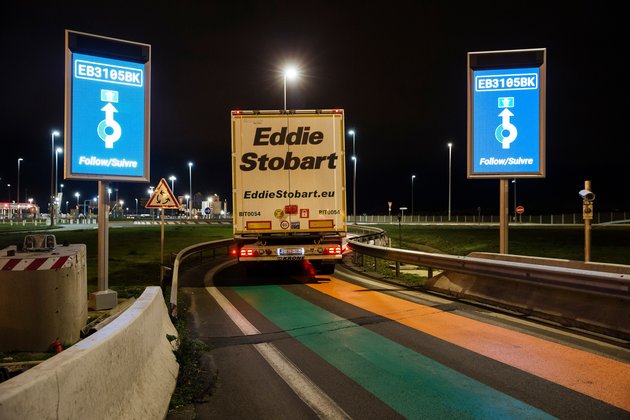 LONDON - Despite making up just 0.1% of Britain's economy, fishing played an outsized role in the brinkmanship leading up to December's Brexit agreement between London and Brussels.

Many Brexit supporters saw regaining control of the country's sovereign waters as totemic. A month since the agreement was signed, many fishermen say they feel betrayed.

Under the deal, a quarter of European boats' fishing rights in British waters will be transferred to British boats over the next five years.

That is not good enough, said Phil Mitchell, skipper of the 23-meter-long trawler Govenek of Ladram, which operates from Newlyn Harbor in Cornwall, England. He believes many fishermen feel they were exploited by the "Leave" campaign.

"They were happy to use us for their campaign, and when push comes to shove, we've had the shove, and we've been dumped on from a great height," Mitchell said.

"The fact now is that we're worse off than before Brexit because it's all written in that we won't be able to get (control of fishing rights) back. And it's just a travesty. Boris, the betrayer, has completely sold us down the river," he added.

Nearly half of the fish caught by British boats is exported to the European Union, a trade worth over $1.8 billion in 2019. Brexit has brought new border checks, paperwork and costs.

Allan Miller runs AM Shellfish from Aberdeen, Scotland, another hub of Britain's fish industry. He said delivery times of live brown crab, lobster and prawns to Europe had doubled, meaning lower prices, while some of the product does not survive the increased journey time.

Miller was one of several seafood exporters to stage a protest outside Parliament in London this month, using articulated trucks to block traffic around Westminster.

"Live shellfish, it's got a sell-by date. It's alive or dead," Miller said. "Unless the government does something, a lot of these businesses will be out of here. They'll be finished."

Johnson insists the problems will be ironed out.

"Insofar as there are problems at the moment caused by teething problems, people not filling in the right forms or misunderstandings. And when it's not people's fault, of course, we're going to compensate and to help out. And funds have been put in place to do that," Johnson told reporters January 18. "But be in no doubt that there are great opportunities for fishermen across the whole of the U.K. to take advantage of the spectacular marine wealth of the United Kingdom. ... There is scope for fishermen, fishing communities, fishers across the U.K. to take advantage of the increase in quota," Johnson added.

It is not just fish that are floundering. Other sectors are warning of significant disruption. New tax rules have prompted some European retailers to stop selling to British customers, while some shipping firms have paused their cross-Channel operations.

Edward Velasco, British import manager at the pan-European fruit and vegetable supplier Rodanto, said problems caused by the coronavirus pandemic have been compounded.

"We've had the added challenge of Brexit and the added documentation that requires hauliers have an extra cost in coming here. They don't know if the drivers are going to get back within a certain amount of time. If they're not, if the wheels are not moving, they're losing money. And ultimately, so are we," Velasco told Reuters news agency.

FILE - Trucks bound for Britain wait on the access ramp to the Channel Tunnel in Calais, northern France, before leaving for England, Dec. 17, 2020.

Supermarkets in Northern Ireland have faced shortages owing to extra checks on goods shipped from mainland Britain. So, is it teething troubles, or an inevitable consequence of Britain's decision to quit the European Union?

"It depends which sector you're talking about, whether these are teething problems or they are structural and endemic to the consequences of having signed the EU-U.K. Free Trade Agreement," said analyst Rem Korteweg of the Clingendael Institute in the Netherlands.

"Where I think there are teething problems is in the issue, let's say, of small-order transports. So, this question of 'groupage' that hauliers are now facing, where they have to sign forms for every single shoebox or crate that is in their container, I think those things can be simplified," Korteweg told VOA.

He added, "Where I don't think we're currently facing teething problems - and things are much more structural - is, for instance, in the health and sanitary, and phytosanitary and food safety checks, for instance, with fish exports. Because that is the consequence of leaving the Single Market, that there is now a regulatory border."

Britain insists Brexit will offer economic opportunities outside the EU. Its strategy was given a boost this week as Japanese carmaker Nissan pledged to keep building cars in Britain and invest millions of dollars building a new factory to make batteries for electric vehicles.

From 2027, all British and European carmakers will have to source batteries from either Britain or the EU or face tariffs on their exports.

The government hopes other companies will soon follow Nissan's lead and invest in its vision of a "Global Britain." But a month on from the signing of the EU-U.K. Free Trade Agreement, many businesses say Brexit has so far brought extra costs and little benefit.